I’m not suggesting that a vendor should always bend over and under the archaic “The customer is always right” mentality, but I’m all for the truth.

Telling the truth about an experience, and letting the court of public opinion decide, however, I think is totally fair.

Social media, and the internet, has changed the retail experience. In the past, it was possible for a retailer to operate in a “dodgy used car salesman” business model. They could screw the customer knowing that, whilst they might not get repeat business from that single customer, there would be plenty more patsies coming along. They could maximize the profit on every particular deal (offering little or no service; reducing their costs). Refunds? No way! Warranty? Forget it! Bad experience? Boo-Hoo! Complaints? Like we care! Providing there was a steady stream of new customers ignorant about their business practice and shoddy service, this routine was the strategy for generating maximum profits. If a past customer was unhappy; so what! They just had to eat it up! Providing the bad experience was below what was a worthwhile/cost effective threshold for the customer to sue (along with all the associated opportunity costs), they could get away with this. Done maliciously, and with dubious intention, it was racketeering. Done without caring, it was just vanilla sleazy business practice.

Now the internet is here and online reviews abound. A retailer must now figure out the bigger picture. If a customer is unhappy, she has the power to write a review that is read by tens of thousands of future potential customers. A merchant must perform a more complex calculation to maximize future profits. There is a cost to service any customer (which eats into profits, but is a one-time event), and balancing this out is the opportunity cost of not servicing the customer. An unhappy customer might write a negative review about their experience on the internet. If this negative review is read by tens of thousands of potential future customers, and it’s enough to persuade even a fraction of a percent of these folks to churn them to an alternate vendor, they’ve lost the margin on all those future sales. It’s also the ‘gift’ that keeps on giving as the internet does not forget. | 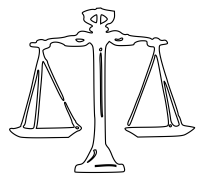 |The way to maximize profits is not necessarily through maximizing each individual deal. Remember, a happy customer has the potential to be a repeat customer (giving more chance for future profit), in addition to broadcasting their experience to many more people. In a pre-internet era, ‘many more people’ was a handful of friends. In a social media society, with the right hash tag, this could be millions of people.|

I’m bringing this up because of a terrible experience I’m having with a merchant called Jomashop, who sold me a watch.

Read my experiences, then decide for yourself whether you think Jomashop is doing a reputable thing, or if I am being one of those angry customers try to extort something that I’m not entitled to.

|On August 3rd 2015, I purchased a watch online from Jomashop. It was a Citizen Blue Angels Skyhawk A-T Mens Titanium CZJY0050-55L. It was a fine watch, I loved it.In October 2017, the watch broke. (The hour hand went lazy and stopped moving, in addition, when you pulled out the crown to adjust the time, nothing happened). That sucks, but I can appreciate that sometimes mechanical things fail. It was not the fault of Jomashop that it broke; I had no animus. Luckily it was covered by a warranty. No harm, no foul, I’ll get it fixed.|

In October 2017, the watch broke. (The hour hand went lazy and stopped moving, in addition, when you pulled out the crown to adjust the time, nothing happened). That sucks, but I can appreciate that sometimes mechanical things fail. It was not the fault of Jomashop that it broke; I had no animus. Luckily it was covered by a warranty. No harm, no foul, I’ll get it fixed.

I called Jomashop, they confirmed it was covered under a five year warranty (yeah!), and gave me a return number (so far so good!) I wrote a note explaining the symptoms, and shipped the watch back to them, per their instructions, using UPS with their RMA number. They even emailed me back on November 2nd confirming that they’d received it. This email proudly claims that Jomashop “strives to keep you up-to-date regarding your merchandise repairs”, and that the repair time can take “up to eight weeks” (remember these two phrases!) 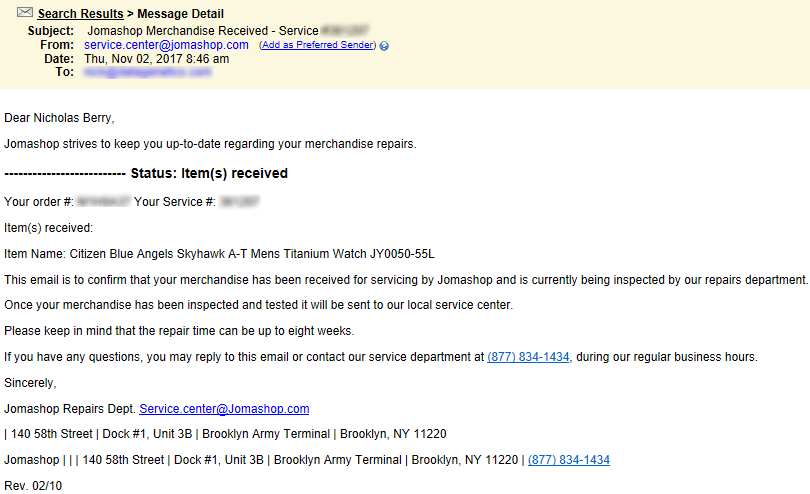 On November 24th, they returned the watch to me saying it was “repaired”. The terse note that came back with the watch said they had “deep charged it” (it’s a solar powered watch), and it was good to go. They had not attempted to repair the watch in anyway; they had not read the note I’d send with the watch about the symptoms, nor had they even tested it (had they done so they would have discovered that the crown did not work, nor did the hour hand).

I called them a second time, received a new RMA number, and send it back to them via UPS, again with a note of the issue. Yet again, they confirmed they’d received it, and sent me an email on December 11th 2017 explaining again that it could take “up to eight weeks” for repair, and that they’d “strive to keep me up-to-date”. The irony, is that I’ve not heard from them since!

After the allotted maximum eight weeks they said it could to repair, I email them asking for an update. I received no reply.

OK, sometimes emails get overlooked, so I’ll forgive them. I emailed them again a couple of weeks later on February 13th 2018, asking for an update. No reply.

I emailed again, a week later, asking for an update, still no reply.

I emailed again after another two weeks. No reply.

I called them up on the telephone. They promised somebody would call me back. I left my number. Nobody called me back even days later.

I called again on March 1st 2018, and finally spoke to a lady called “Kadi”, who confirmed they had the watch, and that “they had just looked at it, and yes, it is broken.” WTF?!?! They’ve had the watch 80 days, and only just looked at it now, decided it was broken, and that they would send it out for repair, and that I should receive an update “shortly”.

No surprise, but they sent no update to me, nor, returned the watch.

I emailed them a few more times asking for updates, and, per their track record, did not receive a single reply. I’ve never even gotten a courtesy “Thank you for your email” response.

Other than the email confirming they received the watch, I have received no communication on any media.

I sent a final polite email on April 10th saying this had gone on far too long and if they didn’t return the watch to me repaired they were welcome to give me a refund, or send me a new watch. Failing that, I’d take the matter up with my credit card. I waited two weeks after this ultimatum and received no response so I finally contacted American Express for their leverage.

American Express instantly credited my account for the amount and said they would start an investigation with the merchant. I provided Amex with a paper-trail about the experience, and timelines, and emails. Amex contacted Jomashop and, uncharacteristically, got a fairly instant response from Jomashop, who stated, no, they were not to blame. Jomashop said that if I had wanted to return the item, I should have done it within 28 days of purchase, in the original box! Amex read this, and charged me back the purchase price.

I called Amex, and said look, this is not about returning an unwanted item, this about a warranty claim (I sent Amex a copy of the Jomashop documentation showing that it is covered under their 5 year warranty). The employee at Amex said they understood, and started a new dispute with Jomashop. Yet again, my account was temporarily credited, and the dispute opened. Yet again, Jomashop, instantly responded; no they were not to blame and should keep the money, and Amex re-billed my card.

I contacted Amex a third time, and re-stated my case. The representative was friendly, but said there was nothing else they could do, but they’d be happy to open another dispute case for me, which is what I have done. The Amex people said I could keep issuing disputes in perpetuity, which is what I intend to do (more out of principle).

Until I get my watch back repaired, or a refund, I’m going to continue filing disputes against Jomashop every month. One presumes, when I do this, it causes paperwork for the merchant that they are forced to deal with. Somebody at Jomashop will have to correctly file a response to Amex. If they don’t file I response, I presume I’ll get my money back by summary judgment. Also, one might hope that someone at Jomashop might finally wake up and decide that the wages for the employee responding, and the hassle, and the paperwork they have to do every month, that they might want cut their losses and just repair the watch! |

|All this time, I still don’t have my watch.I’ll continue to update this article with major updates, and if anybody from Jomashop cares to contact me with an explanation of what has been going on, I’ll be happy to post their response here too.|

I’ll continue to update this article with major updates, and if anybody from Jomashop cares to contact me with an explanation of what has been going on, I’ll be happy to post their response here too.

At the current time, I’ve received zero updates from Jomashop regarding the status of my warranty repair since it was returned.

|Now that I’ve shared my experiences, you can make your own call as to if you think I am being an awkward and unreasonable customer, or if you think that Jomashop have done nothing for nine months (and counting) and I’m right to continue to pursue this.I suspect they hope that I’ll give up, and that if they ignore me long enough I’ll run out of patience. I have a lot of patience!|

I suspect they hope that I’ll give up, and that if they ignore me long enough I’ll run out of patience. I have a lot of patience!

If you are reading this article, not as a regular reader of my blog, but through finding it from a Google search query for Jomashop and/or customer service, then you’ve proved the first point of my article. If my article has persuaded you to change your purchase decision, then it has proved my second point.

(Finally, if someone at Jomashop is reading this and is considering “lawyering up” to this post, please let me know where to send the Judge my paper trail of documented emails, phone calls, and correspondence that you received and did not respond to, and how I have made best efforts to attempt to resolve this matter between us in a civil way).