The Linus Sequence (OEIS: A006345) is named after the character, Linus van Pelt, from the popular Peanuts Cartoon. It’s in reference/homage to the cartoon strip see below: 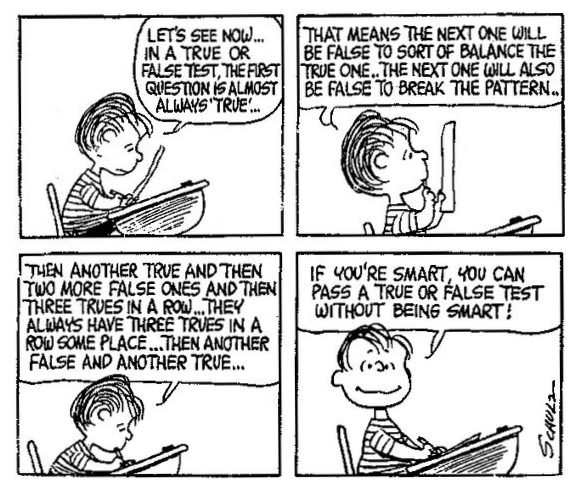 The sequence was first described by Nathaniel Hellerstein, in 1978. It’s a sequence that, ironically, is extended by trying to make a “pattern-breaking pattern”.

Here are the first few entries:

Admittedly, this isn’t exactly the sequence that Linus was describing in the comic strip, but let’s take a closer look about how the sequence grows, and how, mathematically we make a “pattern-breaking pattern”.

At each stage, there is a choice to add either a T or F to the end of the current sequence.

Which character is chosen, is the character that minimizes the length of any immediately repeated sequence that now occurs at the end. It’s a fun little exercise to knock out code to generate the sequence (it’s popular with code golfers).

It’s easy to see through example.

After the first T, if we added another T to the end, we’d get the repeated sequence of TT, which is two units long. Conversely, if we added a F to the end there is no repeat, so adding the F minimizes the repeating pattern at the end of the string.

If we added another F to the end, we’d get the repeated string FF at the end, so instead we revert to T.

We have to now add another T, otherwise, we’d end up with TFTF, which is double repeat of TF.

Adding another T to this string would result in TT at the end (length two), so instead we add another F.

After this. We can’t add another T as this would cause the repeated sequence TFT (the entire string would be TFTTFT), so we have the add F.

It seems a little confusing at first, but the simple rule is that you select the character that avoids the longest possible “double suffix” forming at the end of the sequence.

|A closely related sequence, called the Sally Sequence, actually makes the Linus sequence even easier to understand. The Sally sequence donates the length of repetition that is avoided by selecting the correct option for the Linus sequence.It is named after Sally, Charlie Brown’s little sister. Sally has a crush on Linus (her “Sweet Babboo”).|

It is named after Sally, Charlie Brown’s little sister. Sally has a crush on Linus (her “Sweet Babboo”).

If we take T to be +1, and F to be -1, we can build a cumulative running total of the sequence like a drunken-man’s walk. It’s pretty easy to see the structure in this sequence from the this graph. Here is graphed the first 800 terms.

Similarly, here is a plot of the first 800 terms of the Sally Sequence.